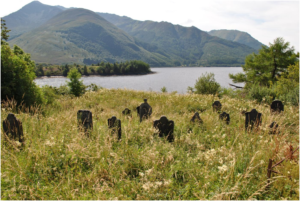 On the death of a Highlander, the corps being stretched on a Funeral board, and covered with a coarse linnen wrapper, the friends lay on the breast of the deceased a wooden platter, containing a small quantity of salt and earth, separate and unmixed; the earth, an emblem of the corruptible body; the salt, an emblem of the immortal spirit.

All fire is extinguished where a corps is kept; and it is reckoned so ominous for a dog or cat to pass over it, that the poor animal is killed without mercy.