How well do you know Scotland? Ten quick questions.

The answers can be found on the Clan Cameron in Australia Member’s Page.

1) What does the word ceilidh translate as?

3) Which American park did the Scots conservationist John Muir found?

4) What is the current Guiness World Record for tossing the caber in one hour?

7) What do geal and dubh translate as?

8) What was the Roman name for Scotland?

9) What kind of weather is described in Scotland as smolt?

10) Who is entitled to wear what feathers?

Additional family stories or updated accounts, with a hint below, have been added to Edition 1.

As the daughter of stonemason in the Ardnamurchan Peninsula in the 18th century John’s great Grandmother Isabella emigrated to Australia on SV Brilliant in September 1837 as a widow with seven children, first settling in the Hunter Valley of NSW. John’s grandmother then settled on the Clarence River establishing the property ‘Highfield’ which was noted as haven for ‘travellers’ during the Depression years.

James’ great great Grandparents Archibald and Catherine Mathieson emigrated to Australia from the Blaich locality in Lochaber on the Boyne in 1838 as part of the Highland Emigration Scheme, settling in the Dubbo region where their siblings became prosperous graziers.

From humble tenants in the small settlement of Blarachaorin, situated on the old military road between Kinlochleven and Fort William, Chris’ great great great great Grandparents Angus and Isabella had six children. John and his family emigrated to Australia on the Blonde in 1849 to settle in the New England area of NSW along with a number of other highland families. The area was affectionately referred to as Scot’s Corner and with grit and determination and in a supportive and united community they became successful graziers and contributed to the wider life of the local area.

Hailing from the Ardnamurchan area, as did John Cameron’s descendants  above, Alistair’s descendents emigrated to New Zealand on the Blenheim in 1840. Alistair’s mother Joan Aitkins descends from those who settled in the Otunui area, in the rugged central highlands of the North Island. Family members lived in a large tent before a large timber house was built which also served as the local Post Office. Alistair relates tales of Angus who at 32 stone (over 200kg) reportedly broke the neck of a bull with his bare hands.

Alistair’s paternal descendants settled and farmed land in the Wairarapa area where the family home is currently occupied by 7th generation New Zealand Camerons. Alistair emigrated to Australia in 1981. 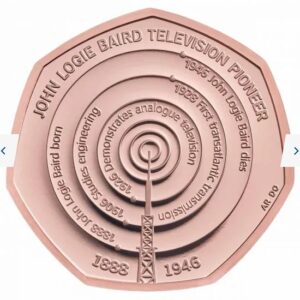 When we visit Culloden Battlefield we will inevitably head out across the moor and stand in front of the large memorial cairn in the centre of the field. Surrounding the cairn are most, but not all, of the grave markers on the field, so what is the history of these markers? 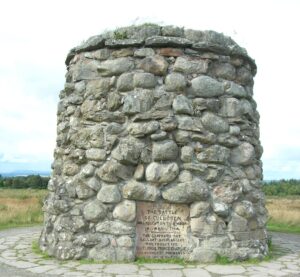 The markers on the battlefield were put in place in 1881, some 130 years after the battle. One of the main question we are asked regards the names on the stones, as many carry the names of one or more clans who fought at Culloden. There have been geophysical tests of the area completed and they show that the area around the cairn does indeed hold many mass graves but how the names on the gravestones were chosen is something of a mystery.

Clansmen would not have been easy to distinguish from one another. There was no clan tartan back in 1746 so identifying a persons clan relied on smaller things that their cap badge or clan plant that men may have worn. After the battle it would have been incredibly difficult to accurately determine who was from which clan so it is believed that the markers on the field are symbolic of the major clans who fought at Culloden and who suffered significant losses.

As well as the marker by the cairn, there are a few others across the field. Further north are three stones that commemorate the MacDonald’s who fought on the far left of the Jacobite front line. Whilst they did not take part in the hand-to-hand combat that occurred further south they were instrumental in aiding the retreat of the Jacobite army. Each year at the anniversary of the battle the local MacDonald clan and supporters will march down to the stones after the main ceremony to lay a wreath for the men.

Perhaps one of the most annoying and intriguing stones on the battlefield is that of the ‘Field of the English’. This stone lies behind the front line of the Government troops and supposedly marks the site of a grave of the Government men who died during the battle. However, there are two issues we have with the stone. Firstly, research has shown that there is no sign of a mass grave by the stone. The nearest lies some fifty yard to the West of the stone. Secondly, its inscription, ‘Field of the English’. This is not accurate. The Government army was not an English Army, it was made of men from Scotland, Wales and England making it a British Army. 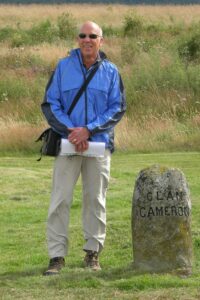 The website administrator standing near the Cameron marker in 2007

Despite some questions on the accuracy of the markers though there is no doubt to how special they are to the site. Many who visit take a moment as they walk past the stones to take in the incredible atmosphere of the battle and remember the history of the site. 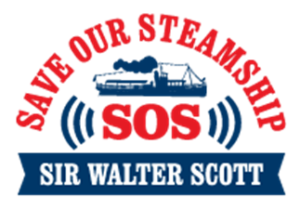 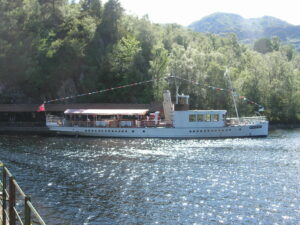 The charitable Trust that looks after Sir Walter Scott Steamship has launched an urgent SOS – Save our Steamship appeal to restore the much loved 121-year-old steamer.

£500,000 is needed to restore the historic steamer, which is currently not sailing as she requires a new boiler and other significant repairs. These funds will have to be secured by the end of this year to allow work to begin in time to allow sailing in the National Park in summer 2022.

Sir Walter Scott Steamship, named after the poet whose famous poem ‘Lady of the Lake’ about Loch Katrine was published in 1810. Scott was born 250 years ago, and his work and that of other artists and poets of the day put Loch Katrine on the map.

Support for the appeal to get Sir Walter Scott Steamship back into operation for current and future generations to enjoy sailing on Loch Katrine can be made via the link below..

Sir Walter Scott was launched in 1900. She was Loch Katrine’s fourth steamer. The first being Gypsy, introduced in 1843, providing competition to ‘Water Witch’, an eight-oared wooden galley.

Gypsy was to sink under mysterious circumstances just a week later, allegedly by the ferrymen who thought the steamer’s arrival threatened their jobs. Rob Roy and then Rob Roy II steamers followed until 1900, when Sir Walter Scott was introduced. 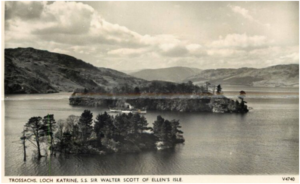 The loch is 11 miles long, one mile wide at its widest point, and 540 feet deep. The name comes from the Gaelic ceathairne, meaning cattle thief which may be due to strong links with famous cattle dealer and Clan Chief Rob Roy MacGregor. Loch Katrine is one of Scotland’s natural wonders with a rich history and stunning scenery, attracting visitors for over 200 years.

In 1809 Scottish writer Sir Walter Scott holidayed in the Trossachs and spent many hours writing his poem ‘The Lady of the Lake’. When released in 1810, it was the blockbuster of its day; 25,000 editions were sold in the first 8 months after release. Sightseers flocked to Loch Katrine to see for themselves the scenes inspired by Scott’s vivid descriptions. He followed this with his adventure novel Rob Roy in 1817, which romanticised the rogue-hero and reinforced the appeal of the loch. 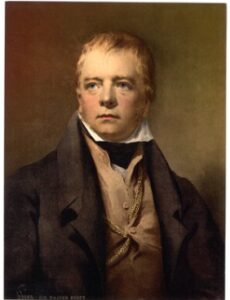 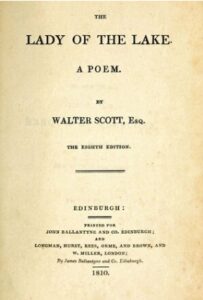 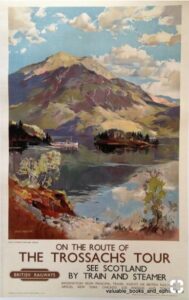 Local Marlee Cameron Heather Oldham and husband Murray set-up their Clan Cameron tent which was well attended and supported by Camerons from near and far. 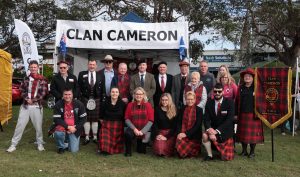 The Massed Pipes and Drums Band Parade leading the Clan banner bearers is always a highlight of a Scottish gathering.

The day included a wonderful range of events and activities including Highland Dancing, Tug-O-War, Hurling the Haggis, foot races for the children and a display of swordsmanship by the Highland Rose Jacobite Re-enactment Group. 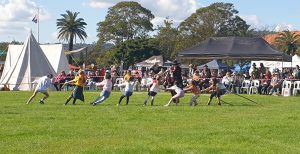 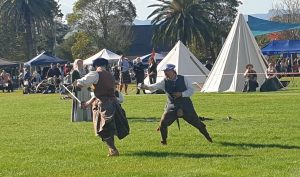 We were delighted to greet Cameron members and friends at the tent and meet with other Clan representatives from across Australia. 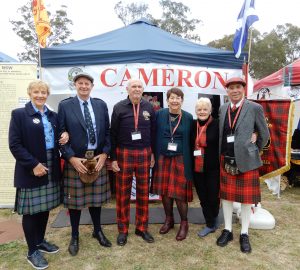 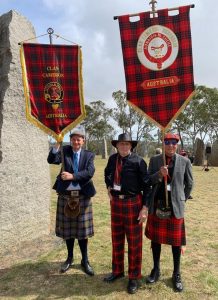 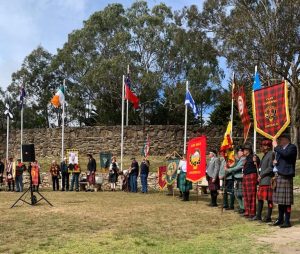 The representation of all Scots Clans on Tynwald Hill lead by the Murrumba Pipe and Drums, together with the Kirking of the Tartan lead by Judi Toms, were highlights. 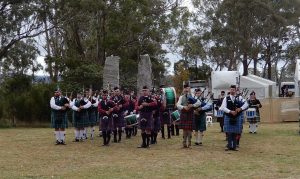 The uplifting rendition of traditional Scottish music by the Murrumba Pipes and Drums together with the Glen Innes Pipe Band and the Queensland Irish Pipes and Drums certainly added to the occasion. 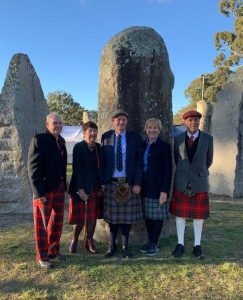 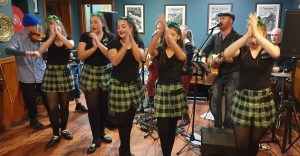 Those fortunate enough to visit the Great Central Hotel at the conclusion of the festival were entertained by the Shamrocks and the band, Limerick, both based in Brisbane.