Culloden – 21 April – The Duke of Cumberland and the Aftermath

Culloden – 21 April – The Duke of Cumberland and the Aftermath 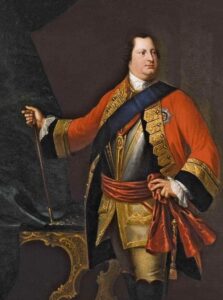 On the 21st April 1746, a decision was taken to hold formal celebrations in Glasgow of the victory of William Augustus, Duke of Cumberland; over the “rebel” army at Drummossie Muir (Culloden) on the 16th April.

The c.1,500 Jacobite dead from the battle had mostly been buried in mass grave pits by the 20th, with any valuable items from their corpses stripped and sold in the markets of Inverness; and the retributions across the Highlands had already begun. Innocent civilians who were wearing tartan had already been dragged out into the streets in Inverness and shot along with Jacobites who had escaped the battle into the town and were looking for shelter. Houses had already been set alight in the Great Glen and other areas.

In London, news was beginning to break about the battle. For several weeks, before the news of the harsh reality of the repercussions was to seep southwards, the Duke of Cumberland would be heralded as an heroic saviour of peace and protector against tyranny.

The 25 year old Duke (who, despite latter depictions, was not that unfit at the time, but had received a wound at Dettingen in 1743 which may have helped cause his developing obesity) had done his ‘job’ of protecting his father’s throne against his cousin and, the process of the retributions thereafter were part of his efforts to stamp out any future rebellion against the Hanoverian household.

In Glasgow, this was something people generally wanted to support. The town’s formal celebrations included giving the Duke of Cumberland the Freedom of the Town on this day 276 years ago. This was, of course, a vastly Hanoverian town which was almost ransacked by the Jacobite army as they came through – an episode in which Cameron of Lochiel shot and killed a kinsman who was looting. To this day, when a Cameron of Lochiel enters the city, the town bells are supposed to ring. When did this last occur?

As well as the Freedom of the Town, the Duke of Cumberland was given an honourary degree by the University of Glasgow. This degree still stands and has not been retracted. A debate raged a few years ago as to whether this should be the case. Not, in any way, because the Duke of Cumberland deserved it, but it is a significant indicator to the mix of emotions in Scotland after Culloden and the errors of judgement in the days and weeks after Culloden. It also strongly shows that a large number of Scottish people supported the Duke of Cumberland’s views on Jacobitism.

These are all topics of debate and research that should be remembered and researched, not re-written and erased in some way. It also wasn’t the current staff of Glasgow University who gave the degree, so for them to have to retract it would be a strange way of making them responsible or accountable for something they had no part in. Symbolically it may be wanted by some people; but the symbolism of retracting it should not (and could) detract from the historical fact that it was given. It is on the record and should remain on the record for the reasons mentioned above.

As we must now be aware, what the Duke of Cumberland inflicted at Culloden was not a victory against tyrannous rebels, it was a bloody defeat of an army who opposed his views led on behalf of a rival household.

What is even more important is that the Duke of Cumberland’s orders, both in the immediate and medium-term aftermath, led to a long-term and arguably continuing attack on Gaelic language and culture, from which the Highlands suffered numerous negative impacts. That is what must be remembered most of all on this day.