Victory on the Culloden Battlefield – but the fight is not over

Victory on the Culloden Battlefield – but the fight is not over

The Highland Council has refused planning permission for the change of use and conversion of Cuchunaig steading.

The Culchunaig farmhouse sits on a pivotal part of Culloden Battlefield, outside the ownership of the National Trust for Scotland property, but where fierce hand to hand fighting took place and where soldiers of both sides fought and died.

During the battle HRH Prince Charles Edward Stewart took up a position just to the top right of the building as shown in the picture below. 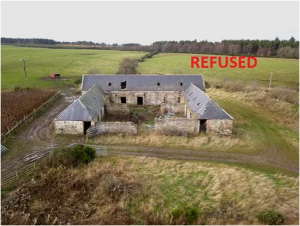 A great result for the conservation of Culloden!

Below is a short video from the Roaul Curtis-Machin, Operations Manager at Culloden, National Trust for Scotland concerning developments on Culloden Battlefield.

The 16-luxury house estate at Viewhill that the Group to Stop Development at Culloden (GSDC) was originally set up to oppose can be clearly seen in the video. Like an eyesore as forewarned and fully visible from what some refer to as the ‘core battlefield’.

These are the same houses that the developer, planning agent, HES, the Scottish Government-appointed Reporter and pro-development local councillors, amongst others, insisted would not be the case.

And this is the view through just a small gap in the trees along the B9006 road which are likely to be felled in the near future.

We all share the concerns of the NTS and welcome their revised recognition of the importance of other key sites such as Culchunaig, and GSDC calls on all like-minded individuals and organisations to work to prevent further unwanted developments on the battlefield.

Thanks to David Learmonth and the GSDC  for their commitment to preserving the integrity of the Culloden Battlefield.