Another article 8 December: The Inverness Courier – A plan for a Culloden steading conversion re-appears

Another article 8 December: The Inverness Courier – A plan for a Culloden steading conversion re-appears 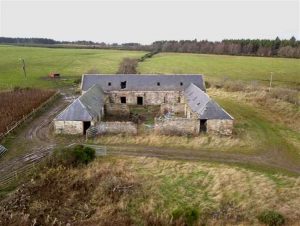 A drone image of the current steading

The man behind an award winning architectural practice has submitted an application for a similar project despite it already having been through the entire planning approval process only to be ultimately rejected by Scottish ministers.

Campaigners aiming to preserve the historic Culloden Battlefield have reacted with fury at the re-emergence of the plan to convert a steading on the battlefield into a large home.

It comes less than a month after being rejected by Scottish ministers and before Highland Council could even formally recognise that outcome at the next south planning applications committee on Tuesday.

Previously, it had been granted planning permission but the Scottish Government called it in to examine the council’s contested decision, a reporter recommended approval but in a final twist Scottish ministers rejected it.

But the man behind the development, architectural technician Mark Hornby of MRH Design, says the plans to create a U-shaped home at Culchunaig Steading have been greatly scaled back.

In a design statement, Mr Hornby said the new proposal took into account the objections of Scottish ministers and the revised plans mean that only the existing building is part of the development.

“The revised and scaled down proposal now submitted has taken the comments and findings of the Scottish ministers fully into consideration and has been guided by the concerns and issues raised,” he said.

“In particular, ministers considered that only the ‘sympathetic’ conversion of the existing steading would be assessed as acceptable.

The move provoked uproar from the Campaign to Stop Development at Culloden.

Group spokesman David Learmonth said: “This is a truly appalling case of the inability of Scottish planning law to preserve sites of national importance.

“It is beyond appalling that any Scottish battlefield, much less Culloden, denominated as ‘of national importance’ is given no more regard under standard planning laws as just any other piece of land within the nation.

“To date, Culloden Battlefield has already been encroached upon to the north (Viewhill) and further proposed developments to the east (a holiday park at Treetop Stables), south (Tannach, new house), south-west (Culchunaig, new house) and north-west (Muirfield, new house).

“Each and every one of these developments is located on strategic locations of Culloden Battlefield and threaten to destroy the integrity and archaeological features and remains.”

It is not known when the council will make a ruling on the application, which has received 18 objections.

On Tuesday, the south planning applications committee will also determine whether hugely controversial plans for 13 holiday lodges, a shop or café and restaurant at Treetops Stables will get the go-ahead. If councillors give conditional approval, Scottish ministers will be told and will decide whether to call it in for a final decision.

The Group to Stop Development at Culloden

An appeal from the Group to Stop Development at Culloden (GSDC) that a strong message needs sending that once planning permission is refused for any site within the Battlefield that decision must be considered Final. No more re-submissions of renewed plans within days of a refusal.

We need each and every GSDC member and friend to help us to send that message loud and clear. Anyone in the Highland region, Scotland or worldwide can do so. Currently there are just 19 objections on the new planning file for the house at Culchunaig.

HRH Prince Charles Edward Stuart took up a position during the latter stages of the battle of 1746 in the field just above the steading depicted in the photo. From there, ‘Prince Charlie’s Stone’ once stood.

If you need any help in writing your objection, please look up the GSDC objection that can be found in the comments section in the planning file (link here: https://wam.highland.gov.uk/wam/applicationDetails.do…).

Please write to eplanning@highland.gov.uk with your objection to planning application 20/04611/FUL.

Thank you for your support! 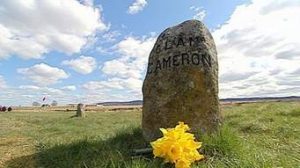