The most often repeated misinformation – from the printed press to the BBC – is the idea that the property owned by the National Trust for Scotland (outlined in green on the map) is the entire battlefield. It is, in fact, less than half the active ground of combat. The map below was created by Dr. Christopher Duffy, the most repected military scholar on the battle, when he was asked by the then Historians’ Council on Culloden, led by Deborah Dennison and Dr Duffy, to place current landmarks on the same map as the depiction of the battle action.

The blue spots represent current or proposed development on the battlefield (there are more since this was done) At the moment, aside from the spa and resort proposal (which is behind the Government lines to the east) there is a private road and large luxury house in planning for a most critical part of the actual brutal bloodshed on the field of combat.

Another piece of so much ‘fake news’ about the battle is the idea that this ground was insisted upon by the Prince – against Murray’s recommendation. This is simply not true and primary sources confirm this. The Prince and the High Command had chosen their ground the day before at Newlands to the east where the ground was drier and offered better sight lines along the battle array.

The position they had to take on the morning of April 16th when the exhausted Jacobite Army woke to find Cumberland had moved past Newlands, was between the Culloden Park Walls and the Culwhiniac enclosure. This position protected the Jacobite battle line from outflanking – critical for a force less in number, artillery and cavalry. The only alternative was to run and allow Cumberland to take Inverness, which, with Fort William in Government hands and Fort Augustus soon to fall, and would have resulted in the same Government desvastation of West Highlands and Islands which happened after the defeat . There was a chance the Jacobites could fight off Cumberland and most agreed (not just the Prince) they had to take it. Contrary to more common myths, the Jacobite right flank conducted a brilliant and successful fight against the Government. There were many complicated factors which led to the Jacobite defeat – it was likely, but not certain.

If you look to the Jaoobite left flank (the north) you will see that they moved forward from the original battle array (at the Culloden Park walls) into deep bog. This was largely Clan Donald under Perth and Glenbuchat. They were subjected to a terrible barrage of artillery fire as they waded through the thigh high bog. Ironically, had the Government used their previous tactic of sending in their cavalry and dragoons to combat the Highland charge (as they had at Prestonpans and Falkirk) the bog would have been an important protection for the left flank againt the cavalry charge. As it was, clan Donald was caught in it in the charge – this is where Young Clanranlad and Glenaladale was wounded and where Keppoch fell.

Three days after the battle, when the Government finally gave permission for the bodies to be buried, the pits were dug at the centre where about 700 Jacobite dead lay in piles. Did the men pressed to gather the bodies into carts go all the way north to the Culloden Park walls to pull bodies out of the deep bog? Their carts could certainly go nowhere near it. We know that at least 1200 jacobites were killed on the field and we know that the pits contain between 700 and 750 bodies. Very few of the dead were rescued from the field as the Government forces killed most who tried. The maths is simple.

The developers who want to build on this ground and drain the bog brought in GUARD to do an archaeological study. GUARD has been for the past ten years a group of archaeologists for hire, no longer a part of the University of Glasgow. They did some metal detecting on this ground and declared there was no evidence that anything happened there. But the eye witness statements from both sides of the battle do not confirm this conclusion. This ground has also been scavanged by souvenir hunters and later by metal detectorists (taking away buckets of musket balls from the field) for the past two hundred years – so the evidence has been long destroyed. It is also likely that remaining metal has sunk deep into the bog beyond the reach of surface detectors.

What is clear is that these facts are not widely known by the public or by the politicians and those who wish to exploit this ground for profit or luxury houses are winning the day. 87 objection letters have been written by history and cultural organisations to the Highland Council and are being ignored. A petition of over 100,000 signatures was also ignored. Even public statements by Scotland’s most esteemed historians, Prof Sir Tom Devine and Prof Murray Pittock have been ignored. Only a massive public uproar might change government policy to destroy this war grave. If you feel strongly about this – write to the FM and to your MSP. Write to Historic Environment Scotland to protest their lack of a consistent stance to protect this ground. Once lost – it is gone forever. 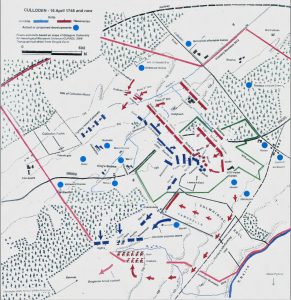