Fury as Culloden holiday village up for approval – after previous rejection

Fury as Culloden holiday village up for approval – after previous rejection

by Chris MacLennan and Alistair Munro 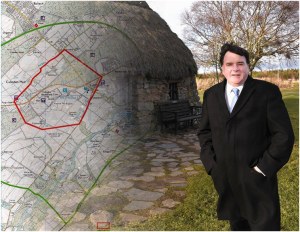 Controversial proposals for a holiday village near Culloden Moor are to be recommended for approval by Highland Council, despite strong opposition.

Members of the south planning committee are to be asked to back the development, which has attracted outrage from those opposed to developments on the historic battle site.

Inverness Paving wants to build a four-star, £1 million holiday village with 13 lodges, a 100-seat restaurant and cafe and shop at the former TreeTops riding centre in Faebuie, a mile-and-a-half from the battlefield.

The chosen location was reputedly the staging ground for government troops preparing for combat against Bonnie Prince Charlie’s Jacobite army.

An initial application was refused by the council under delegated powers on the grounds it would not “preserve, enhance or develop” the wooded site, citing both the Highland-wide development plan and the Culloden Muir conservation area.

At the time there were 87 objections to the development, including those from historical societies and organisations. 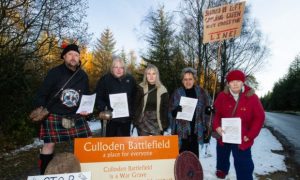 Now, Highland Council officials are recommending the plans for approval.

Elected members have been told by Highland Council that, with the exception of an objection from National Trust Scotland, who were consulted on the application, “all other outstanding concerns/technical issues arising from the consultation process have now been addressed by the applicant”.

Officials say initial concerns identified as the primary reason for refusal in 2018 have now been addressed.

Highland Council’s principal planner, John Kelly, added: “It is our intention to present the application to members at the South PAC meeting on November 3, 2020, with a recommendation to grant planning permission”.

That has angered local councillor Ken Gowans, who said: “Myself and the late Jim Crawford were both pivotal in getting the conservation area put in place, which this development is inside.

“The conservation area is not intended to stop development of say single houses or farm structures, but it is designed to protect the area against what we would consider to be larger scale developments of three houses or more – and this development is of course significantly larger.

“I am very disappointed and disheartened that on this occasion, with such a scale of development, that Historic Environment Scotland (HES) has chosen not to raise any objection as a statutory consultee.

“Given that it is within the conservation area, I would have thought that would have had a significant bearing on their opinion.

“After all, HES’ role is to protect the history and heritage of Scotland and Culloden Battlefield is such a significant site we would have thought they would have had a much more robust approach to this.”

He added: “There have been concerns raised locally by the community council, the local community, as well as across Scotland and the world.

“This is not just a local issue. It is national and international, as is reflected by the 300 objections that have been lodged.

For more information and how you might support the cause to halt this unwarranted development see:  https://stopcullodendevelopment.weebly.com/