Ruthven barracks sits upon the site of an earlier medieval castle. 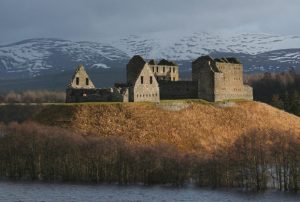 Ruthven Barracks was one of four facilities built to control a key route through the Cairngorms and to provide forward basing of troops near potentially troublesome Highland clans. Its garrison was withdrawn at the start of the 1745 rebellion to augment the main army. After Culloden the shattered Jacobite army mustered at the site before being disbanded.

Perched on a natural mound, the first recorded reference was made in 1229 when it was owned by the Comyn family. Their dispute with Robert the Bruce – culminating in the murder of John Comyn at Dumfries at the start of the 1306 rebellion – led to the confiscation of the castle in the early fourteenth century. By 1451 it was in the hands of Alexander Gordon, Earl of Huntly at which time it was attacked and burnt by the Black Douglases led by John MacDonald, Earl of Ross and Lord of the Isles. The castle was rebuilt in 1459 and was still in use in 1689 when the first Jacobite rebellion ignited. 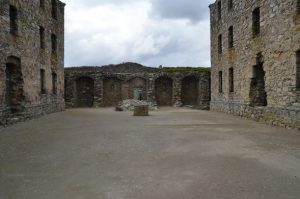 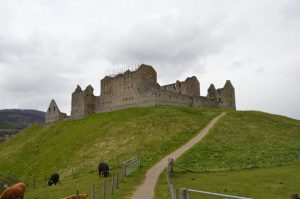 Ruthven Barracks were built between 1719 and 1721 on top of the mound of the original medieval fortification. The structure consisted of two three-storey barrack buildings each capable of accommodating 60 soldiers (each block had two rooms on each floor

poses. The two square turrets forming part of this curtain wall doubled as the Officer accommodation and provided space for logistic functions (including bakehouse and brewhouse). The barracks were designed for an infantry garrison but, following the appointment of General George Wade as Commander-in-Chief of North Britain, he favoured the use of dragoons (mounted infantry) in outposts such as Ruthven as they could be used as a rapid response force along the newly built military roads. Accordingly a stable block was added to Ruthven in 1734.

The final Jacobite rebellion, the 1745 uprising led by Prince Charles Stuart (Bonnie Prince Charlie), commenced in July 1745. The bulk of the garrison of Ruthven was withdrawn at this time – marching to Inverness to join the army of General Cope that had been tasked with neutralising the Jacobite threat. With the bulk of Governmental forces gone the Jacobites attempted to gain control of Ruthven in August 1745 but, without artillery, were unable to dislodge the skeleton garrison (led by a Sergeant Molloy and 14 men). By early 1746 the rebels were in a stronger position having defeated Government forces at the Battle of Falkirk (17 January 1746) during which they captured heavy ordnance. This was brought to bear at Ruthven in February 1746 prompting the garrison to surrender after a short siege. Now in Jacobite hands the facility was burnt but was later used as a rally point for the shattered Jacobite forces after their defeat at the battle of Culloden on 16 April 1746. Lord George Murray marshalled the surviving forces ready for the next stage of the campaign but it was to no avail; Prince Charles was broken and on 20 April his forces at Ruthven received his order “Let every man seek his own safety in the best way he can“. So ended the last Jacobite rebellion and Ruthven barracks was never rebuilt. 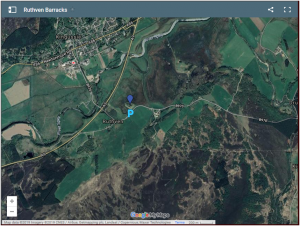 Ruthven Barracks are visible from the A9 near Kingussie and accessible via a minor road that runs past the railway station. A dedicated car park serves the site.

If travelling the A9 highway between Inverness and Pitlochry, as this writer intends doing after the 2020 Achnacarry Clan Gathering, you’ll come across ruined stone walls on a hill overlooking the River Spey. These stoic stone walls are all that remain of the Ruthven Barracks.