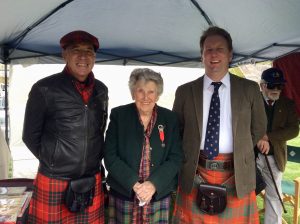 The weather was overcast and cool with a fresh highland breeze enhancing the Scottish atmosphere. We were appreciative of being invited to share the Clan Lindsay tent with Susan Cooke, Commissioner of Clan Lindsay, and fellow Lindsay Clan members.

One highlight was that Val Smith attended, who was Clan Cameron NSW President for eight years prior to James Cameron, from 2001 to 2009.  It was terrific to catch up with Val who is very knowledgeable on Scottish and clan matters and is very engaging to talk to.  She was also the President of the Scottish Australian Heritage Council for a number of years, and was successful in bringing quite a number chiefs to Australia for Scottish week.

Speaking of which, there two Clan chiefs in attendance – Donald MacLaren and Geoffrey Buchanan, the newly appointed chief of that clan, the first for around 300 years.

The gathering was well attended and Clan Cameron NSW was enriched with the enrolment of a new member. Welcome!

The Tartan Warriors lifting the Stones is always an exciting and challenging event. 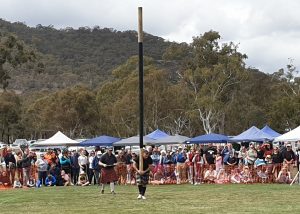 A successful Caber Toss was on show.

The pipe bands are the key to any Scottish gathering. 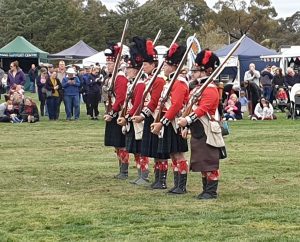 The 42nd Royal Highland Regiment (ex Black Watch) were on display, and survived the day.