THE ESTABLISHMENT OF CLAN CAMERON IN AUSTRALIA

An article published in the Melbourne Argus newspaper on 20th May 1853 described in detail the inaugural meeting of a Clan Cameron Association, pre-dating the known beginning of the association in Glasgow by nearly 40 years (and that in Australia by 85 years). All those present were named, together with regional contacts not present – and many of these have been identified. The first president was Donald Kennedy of Glenroy, probably of the Camisky family, and the secretary was Donald Charles Cameron (pictured) of the Dawnie family. 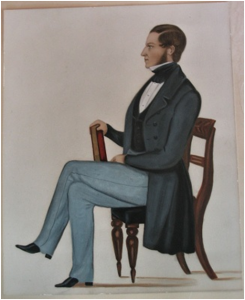 Clan Cameron NSW Inc. membership subscription is currently $25/$30 family and Clan Cameron Victoria Inc. is $13/15 family, but interestingly in 1853 it was determined “That the amount of each subscription to the funds of the Society, should be for the first year not less than £5. Subscribers to the amount of £10 and upwards to be entitled to a double vote at the meetings of the Society.”

It was noted in the records that subscriptions amounted to £200.

A follow-up article on 1 Sept, 1853 called for another meeting of the Association, but it is not known how long it was active after that.

The full content of the public notices published in The Argus, Melbourne, and The Sydney Morning Herald, NSW, 24 June 1938, can be found at the following link:

After the Clan Cameron Association formed in Scotland in 1889 a number of Australian Camerons are known to have joined, with representatives from several states recorded in their minutes. In following years at least two Australians were appointed Chieftains in Clan Cameron in accordance with regulations of the time. These were Lt. Col. Cyril St Clair Cameron of Tasmania in 1899 and Lt. Col. Sir Donald Charles Cameron of Queensland in 1938.

The beginning of Clan Cameron in Australia was in September 1933 when Very Rev. Donald A. Cameron called some local Camerons together, with a view to raising funds for St Andrew’s Hospital in Melbourne. Along with three other active clans at the time, each was to raise £500 for a ward. The hospital opened in 1935.

The first recorded meeting of Clan Cameron in Australia was a social gathering in Melbourne on 18th July 1934. The Clan Association was officially formed soon after, with Mr Alexander Cameron as President and Rev. D. A. Cameron as Vice-President. A general call for members was issued in September 1934. By the third AGM in August 1937 there were 239 members. Clan Cameron Australia, based in Victoria, has been functioning continuously since that time, although post-war numbers have been lower.

Around the same time there was a movement in the Clan Association in Glasgow to enrol Camerons worldwide. By 1936 it was obvious that Lochiel was in danger of losing Achnacarry and the Fiery Cross was sent as a plea for help, with Capt. Evan Cameron of the S.S. Orama spreading the word as he travelled and Queenslander Sir Donald Charles Cameron, MHR acting locally in Australia to promote a trust fund for the purpose. A spectacular reception on the Orama in Melbourne is recorded.

As a response to this activity, branches of the Clan also formed in New South Wales and Queensland around 1938. The first meeting in NSW appears to have been held on 24 June 1938, as published in the Sydney Morning Herald, “The first gathering of the Clan Cameron (N.S.W.) will be held in the New Dungowan on Friday, June 24, to coincide with a great rally of members of the Clan from all parts of the world at Achnacarry, Scotland. Chieftain of the Clan in Australia, Sir Donald Cameron, will be present at the gathering in Sydney.

War came in 1939 and the branches in NSW and Queensland became effectively inactive about that time, although it is likely that some contact with Scotland continued.

The next Chieftain for Australia to be appointed by Lochiel was Dr Ian Cameron, grandson of the founder, and long term president of the Clan in Victoria, with Clan Cameron Australia incorporated in Victoria on 25th July 1985. Dr Cameron held that position, later to be known as Commissioner, from 1985 until his death in 2005.

In 1986 Lochiel visited Australia, commencing in Melbourne and travelling to Sydney and then Brisbane. Lochiel’s visit boosted membership of the Clan in Victoria and NSW, and led to the formation of new branches in Queensland and South Australia. Unfortunately these last branches became inactive in 2002, forced by insurance problems in those states, with many members joining the remaining branches.

Clan Cameron Victoria was notified of their intentions and after a preliminary meeting of interested people held at Concord Hospital an inaugural meeting of Clan Cameron New South Wales took place at the home of Dr Robert Cameron on 10 April 1983. The Executive Committee was Dr Robert Cameron – President; Muriel Johnson – Vice President and Ted Cameron – Secretary. Clan Cameron New South Wales was incorporated on 2nd July 1987 with the objectives of collecting and preserving records relating to the Clan, of encouraging and promoting genealogical research of Cameron ancestry and of fostering social and educational activities for members.

In the early years there was enthusiastic activity. Members began to buy kilts learnt Scottish Country Dancing, attended picnics and annual ceilidhs. Up to 100 members marched in Scottish Week and the Clan has always been represented at the Scottish Act of Remembrance held in Sydney on Anzac day. In order to learn the Clan history the committee bought copies of John Stewart’s The Camerons for distribution amongst members. A genealogical collection was established and steadily grew culminating in the publication of the first edition of Cameron Genealogies in 1989 with the third and final edition being printed in 2000. However, the Cameron genealogy information is continuously being updated and is available to association members via the Clan Cameron website.

The highlight of the early years was the visit of Sir Donald Cameron, 26th Lochiel, and Lady Margaret in early 1986, with formal and informal gatherings enjoyed by all. As Lochiel and Lady Margaret had already visited Melbourne a trip to Brisbane was organised.

1988 Clan members attended a wonderful Bicentennial Ball at St Andrew’s College and later a Harbour Cruise during Scottish Week. The Clan Cameron gathering at Achnacarry in 1989 was a highlight with many members taking the long journey to the homeland followed by many more ever since.

Not surprisingly, the pace of the early years could not be maintained. A core of mainly Sydney based members has kept the NSW organisation going, with a continuing membership happy to receive newsletters to keep in touch. With the purchase of a tent and with items of Clan Cameron history on display Clan Cameron NSW Inc. endeavours to maintain a presence at Scottish and Celtic events held throughout NSW, promoting the Clan and providing opportunities for new members to join the association. Genealogical interest remains a constant, and continues to attract new members to the association.

A Queensland branch of Clan Cameron Australia was formed around 1934, as noted above, partly influenced by a plea for help from Capt. Evan Cameron of the S.S Orama with strong support by Queenslander Sir Donald Charles Cameron, MHR. The purpose of the plea was to offer financial support to Lochiel who, for a range of reasons, was in danger of losing Achnacarry. A Trust account was established to allow funding to progress. The results of this initiative are not recorded.

There are no records available for this Clan Cameron branch and, because of the continuing world depression and impending WW11, the Branch was disbanded in 1937.

From 1987 onwards, Clan Cameron Australia – Queensland Branch members came together regularly under the leadership of the Clan Management Committee.  Many popular and successful events such as Clan Ceilidhs, dinners, combined clan Ceilidhs and Christmas parties were organised at the Queensland Caledonian Club and the Irish Club, both conveniently located in Brisbane’s central business district. Both these cost effective venues have since closed their doors.

This was also the time of the inauguration (1992) of the Australian Standing Stones, Glen Innes. This initiative was followed in 1993 by the dedication of the Cameron Standing Stone by Dr. Ian Cameron, Commissioner, Clan Cameron Australia.

The 1995 Annual General Meeting elected Duncan Cameron as President. Duncan was subsequently re-elected as President for the period 1996-1999. In October 1999 the President believed it would be unwise not to have proper insurance cover and noted the Clan’s financial position.

Gwen Gillam, convenor of the Branch Newsletter for ten years, a constant and one of the most valued members of the Clan in Queensland, accepted the position of Clan President in 2000.  There had been a foreshadowing of increasing problems associated with declining membership, administration pressures, operational cost headwinds, and compulsory Public Liability Insurance charges.

Subsequently, in 2009, following the Scottish Clans Gathering in Edinburgh and  the International Clan Cameron Gathering, Achnacarry (2009), an informal ‘cluster’ of Camerons, Camerons linked by marriage and Septs in Queensland came together. Many of these ‘cluster’ members were originally members of the Clan Cameron Queensland Branch.  The ‘cluster’ (now numbering around 50) has remained informal, with its members strongly resisting the urge to form an official Branch again. Membership registration/communication is now with the strong Clan Cameron NSW Inc.  Members are happy with the occasional informal gathering of this ‘cluster.’

From 2016 through to 2018, a Reference Group of 14  dedicated and skilful Members drawn from the South East Queensland cluster  planned, organised, cajoled and implemented a two day Clan Cameron Gathering at RACV Royal Pines Resort Gold Coast, the first diverse and entertaining Gathering in Australia for  the Cameron Clan, its members by marriage, relatives and Septs.

Now, in 2019, the electronic age has made a truly significant, permanent and most welcome change to global communication, travel, cultural information, genealogy/DNA analysis and the way things can be organised, even though there remains the tyranny of distance in Australia.

While the personal touch is somewhat limited, people are now more connected with a vast array of instant facilities ‘online.’