There are four basic tartans which are utilised by the Clan Cameron, each of which is usually found in “modern” (bright and lively colours), “weathered” (softer hues) and “ancient” (supposedly more authentic colours) variations. 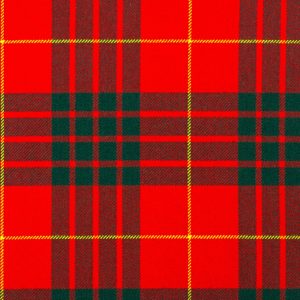 The sixteen green squares upon a red background sett, with a bright yellow bordering, is for use by all members of Clan Cameron. If one tartan had to be singled out for general use by Cameron clansfolk, Basic Clan Cameron – Modern would be the one. As is the case with most clan tartans, this is the one from Vestiarium of Scoticum published in 1845,. It very much resembles an old red and green square sett in the West Highland Museum in Fort William. 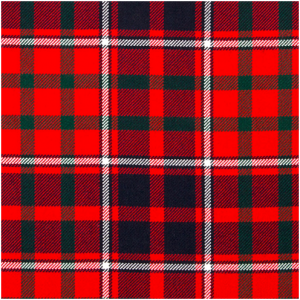 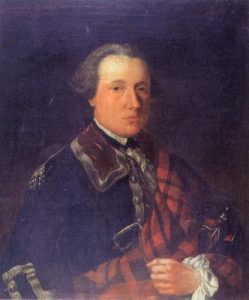 This red and blue tartan is similar to that worn by the 19th Chief, Donald “The Gentle Lochiel” Cameron, in a portrait hanging in Achnacarry. This is the personal tartan of the chief and should only be worn by Lochiel and his immediate family. 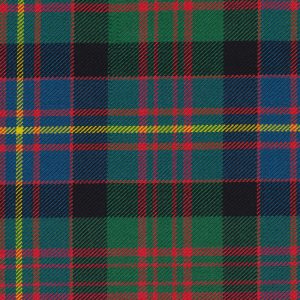 When the very first regiment of Cameron Highlanders was raised by Alan Cameron of Erracht in 1793, it was decided that the red-based Clan Cameron tartan would not be used, and instead a new design was devised.  The Cameron of Erracht tartan was based on the MacDonald sett with the addition of a gold overcheck from the Cameron tartan, and the omission of three red lines found in that of MacDonald.  This was unique among Scottish regiments at the time, whose tartans were based on the Government Tartan, The Black Watch. The tartan was never adopted by the clan. 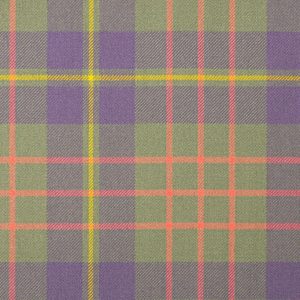 With its soft shades of green and blue, Hunting Cameron of Lochiel tartan is not listed as being restricted in its use.  It was devised because the “basic” Clan Cameron tartan was considered too bright for shootings, stalking and hiking.  Designed in 1956, it was based on a description of the tartan worn by the clansmen who fought under Sir Ewen Cameron, 17th Chief, at the battle of Killiecrankie. 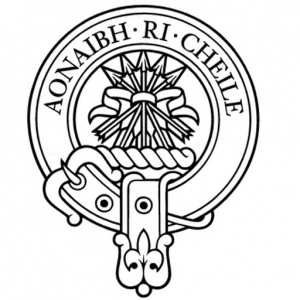 A sheaf of five arrows “united” with a gules ribbon or band with the motto “Aonaibh Ri Cheile” on the upper half of a surrounding belt or strap.

The “Five Arrows” represent the five branches of the clan under the leadership of the Camerons of Lochiel during the early/mid-eighteenth century, namely: