Paul Macdonald, Macdonald Armouries, recently revealed a rather historic discovery made only last week on the recent Highland Challenge event in Lochaber.

One of the days involved metal detecting on part of the Siege of Fort William battlefield where over two weeks from late March to early April 1746, Jacobite artillery forces attacked the British Army fort and took a huge amount of cannon and mortar fire in return.

Paul has worked this site numerous times alongside Lochaber Archaeological Society where we have uncovered a significant amount of 13″ mortar fragments which were fired from the fort at the various Jacobite positions on Cow Hill. 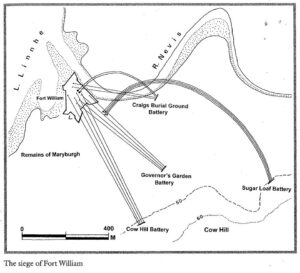 This day however uncovered an unexpected munition in the form of a mid 18th Century grenade and it has since been possible to determine the very regiment and company from which this came. 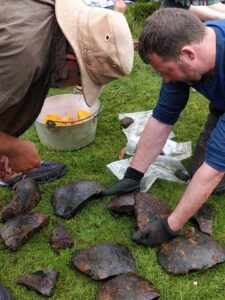 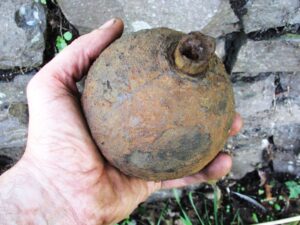 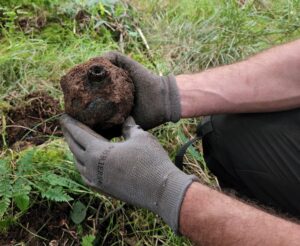 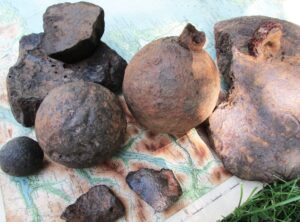 The Jacobite forces had only one company of grenadiers, which were part of the French regiment, Royal Ecossais.

This regiment was under the command of Lord John Drummond and consisted of 12 companies, each of 55 men. 11 of these companies were fusiliers and 1 company were grenadiers.

The Regiment Royal Ecossais had successfully lain siege to Fort Augustus in early March 1746 before switching fire to Fort William with the intention of taking it.

They played their 4 and 6lb cannon as well as 6″ mortars upon the Fort for two weeks while receiving fire from swivel guns, 6″ mortar, 6lb cannon, 12lb cannon and the devastating 13″ mortar.

Grenadiers were the front-line forces that would have engaged in the closest combat, throwing grenades over walls and through windows to soften contained targets for a final close assault.

After two weeks of concentrated efforts, the Jacobite forces did not achieve the anticipated damage upon the fort and eventually abandoned their artillery assets to retreat Northwards where greater numbers were required.

This grenade was unearthed directly above the second Jacobite artillery battery, which our other finds confirm was subjected to intense bombardment from 6″ and 13″ mortar.

It is 4″ in diameter and retains the original casting seam and projection which would hold the fuse.

It is a fascinating piece of history which appears to be the only Jacobite grenade uncovered to date and connects us very directly to a very particular battle, regiment and company of men who fought bravely under fire at this location for the cause.

By these relics and by their actions may we Remember them yet.