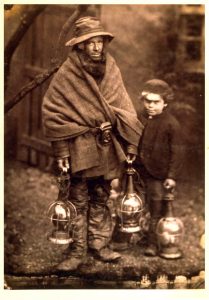 Here’s a hard-working Night Watchman in St Andrews with his son, from about 1870.

Thomas Matthew can be seen here wrapped in oilskins with extra padding as he would be patrolling the cold streets during the hours of darkness keeping watch.

Thomas Matthew was born in Dundee, and he settled in St Andrews with his wife Anne. Thomas’s main profession was as a French Polisher- which means he would finish wood to give it a high shine. However, he made extra income as a Night Watchman and a Fireman.

His son, Peter, was his caddie. Tragically, Peter died aged seventeen when he fell from a steep cliff where he had been playing.

They are both seen holding lanterns and Matthew has a wee tinderbox on his belt.

The original can be found at the University of St Andrews Library.