It is easy to categorise the Celts and Vikings as being one particular stock and therefore Haplogroup (2).  In reality we have Norse Vikings and Danish Vikings both of which appear to be either R1A or of the I1 Haplogroup.   It is pretty rare in England to see the R1A Haplogroup appear in areas that weren’t occupied by the Vikings but in the same breath Haplogroup I1 is found in high frequencies in Scandinavia so the reality is that both can be named “Viking”.

The same can be said for the “Celts”.  The true Celts are the native people who most likely populated parts of the UK after the last ice age and whose populations appear in Cornwall, Wales and Ireland.  The Royal Stewart Line in Scotland are “Celts” but they share the same Y Haplogroup (and paternal ancestor) as those who have the earliest roots in Cornwall.  The so called Celts of the UK.

This Haplogroup is part of R1B so if we go back even further in history all R1B men share the same ancestor, Cameron’s included (the lineage branched out many thousands of years ago from the “Celts”).  Remember surnames are relatively recent in the history of mankind.

However Group A (3) Cameron’s generally certainly don’t appear to be of Norse origin.  We have to also at this stage be careful with the known history of Clan Cameron, as the aim of the Cameron YDNA Project is to sort fact from fiction so we treat all we know of the Clan with kid gloves.  There are many layers of history to uncover.

There would be a great many men out there who test presuming one thing and are devastated when it doesn’t turn out the way they thought.

However with each Group A Cameron FTDNA BigY-700 test (4) that does come in we increase our knowledge of the Clan.  We are seeing real definition with the new testing that wasn’t there before.  We are incredibly excited about it with the new SNPs (4) that are being found are also giving us better dating.

We know that with our Group A Cameron YSTR testing (4) it is unable to tell someone which cadet they belong to because a phenomenon called convergence or back mutation occurs in these men.

This is when a YSTR moves, mutates, either forward or backward over time.  So with other surname projects YSTR testing is very heavily used and relied on for placement in their Project, but it is virtually useless for our Group A Cameron men.  The only use we have for it is within the first 37-67 YSTRS there is a reliable signature that tells us whether or not the tester belongs to Group A or not.

The tree of mankind is possibly quite good to illustrate the position of where Group A Cameron men sit, all the numbers ie. R-A6138 represent actual men in history!  We know that the proginator of Clan Cameron was most likely R-A6138.  This tree only came to be because of those who take their testing further i,e. the Big Y-700.  It will only get better!

* Short tandem repeats (STRs) are repeated sections of DNA that can vary between populations and generations. This variation makes STRs ideal for determining closer relationships – perhaps with 10 generations or so.

* Single nucleotide polymorphisms (SNPs) are single changes in the DNA. Some of these SNPs have a very slow rate of change (think tens of thousands of years), while others change much faster. This steady nature of SNPs allows scientists and genealogists to learn about human migration and the relationships of their own distant ancestors.

R-A6138 is the defining Cameron Haplogroup.

Here is the descent (shown as SNP’s) descending from R-M269 which has 10,761 downstream branches to R-A6138 to date. R-M269 is the most common YDNA Haplogroup in Western Europe and is thought to have originated about 9,500 years ago in the region of the Black Sea, and then spread to Europe very soon thereafter. 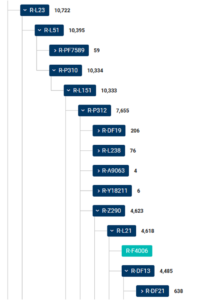 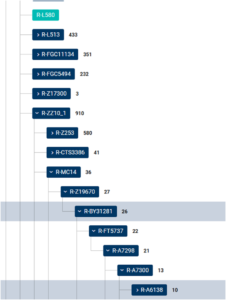 R-A7298 is the progenitor of Clan Cameron, MacPhee & Mcnab.

R-A7300 is the progenitor of Cameron & MacPhee.

The 10 branches underneath R-A6138 are a mixture of now named cadet’s (McMartin, MacGillonie, Clunes & MacSorlie) and unnamed cadets still to be named.

N.B. Appreciation and acknowledgement to Loraine Smith (Project Administrator) and Jo Cameron (Project – Co-Administrator) for their work and dedication to the Cameron YDNA Project. 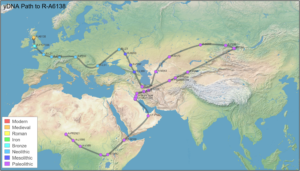