From the Group To Stop Development At Culloden (GSDC)

From the Group To Stop Development At Culloden (GSDC)

Following the 275th Anniversary of the Battle of Culloden, there appears to be a welcome shift notably involving many like-minded organizations towards conservation of Culloden Battlefield.

A well-researched article with viewpoints from many individuals and organisations now apparently reading from the same page can be found in the link below.

The Founders of the GSDC have been trying for seven years to reach this point. They deserve full recognition for all their efforts now rendering such results.

“The word protection is often misunderstood,” she says. “For example our group recently submitted a 21,600-signature petition to the Scottish Government asking for a change in planning laws to allow for greater protection for all Scottish battlefields. Their response was that protection is already in place.

“It is not in place. If it were, we would not have the current situation where Culloden has been under threat from developers for at least the last seven years.” She said the approval of 16 new homes at Viewhill Farm had effectively opened the floodgates for numerous other development proposals. 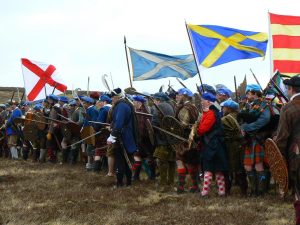 More can be found at The Herald (Scotland).