The Pistol of the “Gentle” Lochiel Restored

The Pistol of the “Gentle” Lochiel Restored

Donald Cameron of Lochiel was the 19th chief of Clan Cameron. Soon after Prince Charles Edward Stuart set foot on the Scottish mainland Lochiel raised the greatest number of men willing to fight for the Jacobite cause from Lochaber. 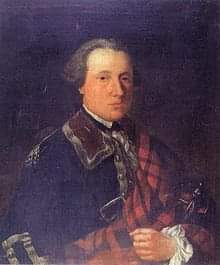 On the 19th August 1745, he led his regiment for the Gathering of the Clans and with pipes playing and banners flying, arrived at Glenfinnan with 827 men.

He was one of Prince Charles’ most trusted advisors and commanders. His honourable Nature in ensuring that prisoners of war were always well treated earned him the name of “Gentle” Lochiel.

He commanded the Lochiel Regiment throughout the 1745/46 campaign and personally led the Cameron men and the Stewarts of Appin in the Highland charge of the Jacobite right wing on the field of Culloden 16 April 1746.

Cameron of Lochiel Flags of the ’45’

He was within ten paces of engaging the British Army Regiments of Barrel’s and Munro’s with his sword and stopped briefly to fire his pistol. In the act of drawing his sword, he was seriously injured in both ankles by a blast of grape-shot fired by enemy cannon.

Lochiel was carried by his men from the field, along with the Cameron banner, which was bravely saved that day. He later joined Prince Charles on the ship that sailed with them to France.

The pistol of Lochiel which he fired that day on Culloden field has been recently restored by Paul Macdonald of Macdonald Armouries. 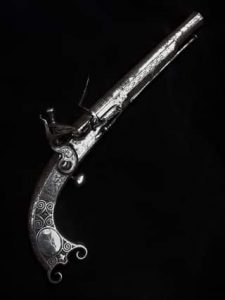 It is one of the finest examples of a scroll-butt Scottish steel pistol, crafted by Alexander Campbell. Alexander was one of the best craftsmen working in Doune, a village famous for production of Scottish pistols throughout the C17th and C18th.

The pistol is crammed with hand-engraving, etching and inlaid silver scroll-work and badges. One of the silver badges on the grip bears the engraved decoration of the Cameron Clan crest. The five arrows represent the five cadet branches of Clan Cameron. These are surmounted by UNITE, an Anglicised version of the original Gaelic motto “Aonaibh Ri Cheile”.

One of the retaining screws for the belt-slide was missing, necessitating the hand-crafting of a period-style replacement and an overall refurbishment of all metalwork.

The pistol is a rare national treasure and testament to our unique martial culture, aspirational craftsmanship and the fearlessness of our forebears. 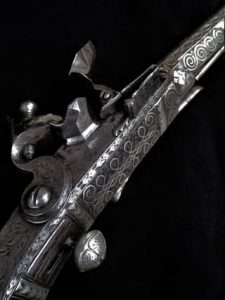 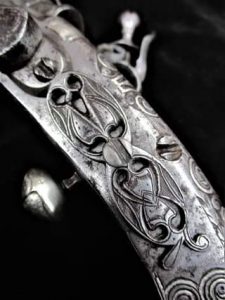 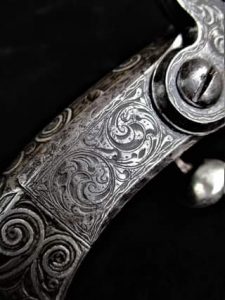 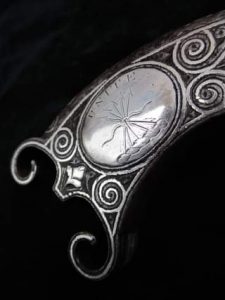 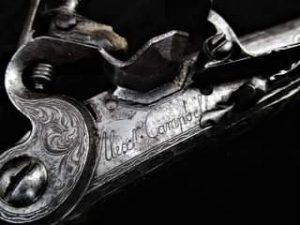 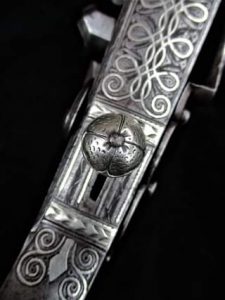 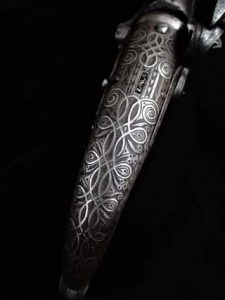