It is with great sadness that we learn of the passing of Valerie Cairney, a great lady and mother of the Scottish Banner publisher and editor Sean Cairney.

Valerie, along with husband Jim, came up with the idea of a Scottish publication in the 1970s. Under Valerie’s stewardship, and now that of son Sean, the Scottish Banner has helped to bring together the global Scottish community with her love of Scottish heritage and culture.

In the September edition of the Scottish Banner Sean writes of Valerie’s passion for and dedication to celebrating Scottish culture and its people and of the joy she had in attending Highland games across the world and connecting with the people, many of whom became life-long friends.

Clan Cameron in Australia wishes Sean and the family our sincere condolences. 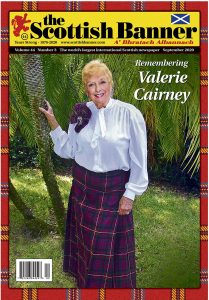 Another link has been added which may be of value to those seeking clarity regarding some Scottish place names and terms.

I have included a few below as an indication of what one might find useful.

Run rig, or runrig, also known as rig-a-rendal, was a system of land tenure practised in Scotland, particularly in the Highlands and islands. It was used on open fields for arable farming. Strips of land allocated to tenants.

Crofting is a traditional social system in Scotland defined by small-scale food production. Crofting is characterised by its common working communities, or “townships”. Individual crofts are typically established on 2–5 hectares (5–12 1⁄2 acres)  for better quality forage, arable and vegetable production. Each township manages poorer-quality hill ground as common grazing for cattle and sheep.

The Highland Clearances were the evictions of a significant number of tenants in the Scottish Highlands and Islands, mostly in the period 1750-1860.

Factor: In Scotland a factor (or property manager) is a person or firm charged with superintending or managing properties and estates—sometimes where the owner or landlord is unable to or uninterested in attending to such details personally, or in tenements in which several owners of individual flats contribute to the factoring of communal areas.

A person who holds a lease and sublets land to others. (Tacksmen were found mostly in the highlands from the 17th century, and were often a close relative of the chief. Although some of them farmed the land themselves, most lived off the difference between the low rent they paid to the chief and the rents they charged to sublet the land.

The term for a peasant farmer. They occupied cottages and cultivated small land lots.

Highland Cottars (including on the islands, such as Mull) were affected by the Industrial Revolution. Landowners realized that they could make more money from sheep, whose wool was spun and processed into textiles for export, than crops. The landowners raised rents to unaffordable prices, or forcibly evicted entire villages. This resulted in the mass exodus of peasants and cotters, leading to an influx of former cotters into industrial centers, such as a burgeoning Glasgow.

The Statutes of Iona

Passed in Scotland in 1609, required that Highland Scottish clan chiefs send their heirs to Lowland Scotland to be educated in English-speaking Protestant schools. As a result, some clans, such as the MacDonalds of Sleat and the MacLeods of Harris, adopted the new religion. Other Clans, notably the MacLeans of Morvern & Mull, MacDonalds of Clanranald, Keppoch, Glengarry, and Glencoe, remained resolutely Roman Catholic.

Often mistakenly called “plaid” (particularly in the United States), but in Scotland, a plaid is a large piece of tartan cloth, worn as a type of kilt or large shawl. The term plaid is also used in Scotland for an ordinary blanket such as one would have on a bed.

The Dress Act of 1746 attempted to bring the warrior clans under government control by banning the tartan and other aspects of Gaelic culture. When the law was repealed in 1782, it was no longer ordinary Highland dress, but was adopted instead as the symbolic national dress of Scotland.

The name usually given to a letter, dated 6 April 1320 at Arbroath, written by Scottish barons and addressed to Pope John XXII. It constituted King Robert I’s response to his excommunication for disobeying the pope’s demand in 1317 for a truce in the First War of Scottish Independence. The letter asserted the antiquity of the independence of the Kingdom of Scotland, denouncing English attempts to subjugate it.

Generally believed to have been written in Arbroath Abbey by Bernard of Kilwinning (or of Linton), then Chancellor of Scotland and Abbot of Arbroath, and sealed by fifty-one magnates and nobles, the letter is the sole survivor of three created at the time. The others were a letter from the King of Scots, Robert I, and a letter from four Scottish bishops which all made similar points. The Declaration was intended to assert Scotland’s status as an independent, sovereign state and defend Scotland’s right to use military action when unjustly attacked.

“As long as but a hundred of us remain alive, never will we on any conditions be brought under English rule. It is in truth not for glory, nor riches, nor honours, that we are fighting, but for freedom – for that alone, which no honest man gives up but with life itself”

Authority of the clans (the dùthchas and the oighreachd)

Scottish clanship contained two complementary but distinct concepts of heritage. These were firstly the collective heritage of the clan, known as their dùthchas, which was their prescriptive right to settle in the territories in which the chiefs and leading gentry of the clan customarily provided protection.[14] This concept was where all clansmen recognised the personal authority of the chiefs and leading gentry as trustees for their clan.[14] The second concept was the wider acceptance of the granting of charters by the Crown and other powerful land owners to the chiefs, chieftains and lairds which defined the estate settled by their clan.[14] This was known as their oighreachd and gave a different emphasis to the clan chief’s authority in that it gave the authority to the chiefs and leading gentry as landed proprietors, who owned the land in their own right, rather than just as trustees for the clan.[14] From the beginning of Scottish clanship, the clan warrior elite, who were known as the ‘fine’, strove to be landowners as well as territorial war lords.[14]

In reference to the history of Scotland, a township is often called a toun (the Lowland Scots word for a township), although before the Anglic language Scots became widespread in Scotland the word baile was more commonly used. 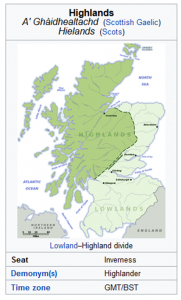 You will notice a change in the layout and options in our Cameron Genealogies site due to The Next Generation software update that powers our Cameron genealogies database.

Family Charts and Group Sheets have embellished images and layout for example, and a PDF of the display can be downloaded.

Clan Cameron NSW Inc. is fortunate to have genealogist Dr Robert Cameron continuing his work managing and updating the data base for the benefit of all Camerons not only in Australia, but across the world.

The continued operation of the website and related genealogy database software is funded by the members of Clan Cameron NSW Inc.

Your donation to help maintain this site, which comes at a cost to the members of Clan Cameron NSW Inc., is welcome. The Donation Button can be found on the website Home Page.

We thank the following who have enabled the association to manage and update the site and the genealogies database, which is not without complications, with considerable time and expertise donated by Hawkesbury Websites and Darrin Lythgoe, TNG, updating our database at a very reasonable cost to the association.