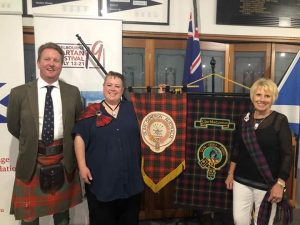 After reading an article in the Scottish Banner (December 2019) I was motivated to find out more about Lilias Adie and share her story and this aspect of Scottish history with members of the Clan. Admin. 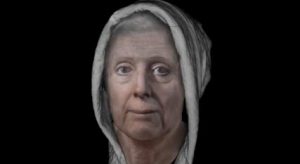 A digital reconstruction of Lilias Adie’s face (University of Dundee)

In the early 1700s, a Scottish woman named Lilias Adie was accused of witchcraft and sentenced to burn at the stake. But before the brutal execution could be carried out, she died in prison, possibly of a suicide. Adie’s body was hastily buried along the shores of the country of Fife, in an ignominious spot. To ensure that the devil did not reanimate his purported collaborator, the grave was covered with a hulking, half-ton slab.

In the following centuries, morbid curio hunters were nevertheless able to access the humble wooden box that served as Adie’s coffin and pilfer her bones. Now, as Nan Spowart reports for the National, officials have put out an appeal for the return of Adie’s remains, in the hopes of finally giving her a respectful memorial.

Starting in the mid-1400s, Europe was gripped by an anti-witch hysteria, leading to the executions of some 80,000 people between 1500 and 1660. Most victims were women, a phenomenon that historian Steven Katz has attributed to “the enduring grotesque fears [women] generate in respect of their putative abilities to control men and thereby coerce, for their own ends, male-dominated Christian society.”

Adie’s story, which is preserved in the minutes from her 1704 trial, reveals the frenzied, tragic pattern of false accusations and false confessions that defined many other witchcraft cases. A woman named Jean Bizet, who “seemed drunk,” according to witnesses, began making accusations against Adie, warning neighbours to “beware lest Lilias Adie come upon you and your child.” Bizet continued to appear “strangely distempered” the next day, crying out, “by God he is going to take me! by Christ he is going to take me! O Lilly with her blew doublet!”

According to Meagan Flynn of the Washington Post, Adie subsequently spent more than a month in prison, where she was interrogated and possibly tortured. Ultimately, she confessed, proffering a wild tale about meeting with the devil “in the harvest, before sunset” and renouncing her baptism. During this “tryst,” she claimed, “the devil lay with her carnally … [H]is skin was cold, and his color black and pale, he had a hat on his head, and his feet was cloven …”

It was widely believed at the time that Satan would resurrect his followers from the dead so they could stalk the pious living. Burning suspected witches at the stake was thought to solve that problem, but in Adie’s case, officials had to find something else to do with her remains—hence the unceremonious grave, topped with a hulking stone. Because most other accused witches were burned, the site of Adie’s burial, identified in 2014, is the only known “witch” grave in Scotland,

Her remains were dug up by antique-collecting grave robbers in 1852. At the time, it was reported that the coffin was 6 feet 6 inches (about 1.98 m) long. Her thighbones were found to be of comparable length with those of a man who was 6 feet (about 1.8 m) tall. She still had most of her teeth, which were “white and fresh”. 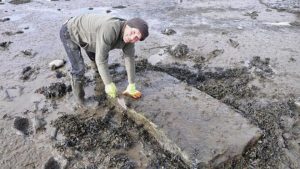 Adie’s coffin was also a source of souvenirs: a walking stick, believed to be made from the wood of her coffin and with a silver band near the handle engraved with “Lilias Addie, 1704”. The skull was in the private museum of Dunfermline  antiquarian Sir Joseph Noel Paton in 1875. It was exhibited to the Fifeshire Medical Association in 1884 by a medical doctor from Dunfermline named Dow. It was eventually held at the Museum of the University of St Andrews, but has since disappeared. The skull was exhibited in 1938 at the Empire Exhibition at Bellahouston Park in Glasgow, its last known location. Fortunately, pictures were taken of the cranium before it vanished, which, in 2017, allowed experts to produce a reconstruction of Adie’s face.

Fife Council has put out an appeal for the return of Adie’s remains, in the hopes of finally giving her a respectful memorial.

“There was nothing in Lilias’ story that suggested to me that nowadays she would be considered as anything other than a victim of horrible circumstances,” forensic artist Christopher Rynn told the BBC at the time. “So I saw no reason to pull the face into an unpleasant or mean expression and she ended up having quite a kind face, quite naturally.”

On 31 August 2019, 315 years after Adie died in custody, a memorial service was held in Torryburn and a wreath laid at the site of her grave to raise awareness of the persecution these women and men endured in Fife during the witchcraft panics.

The new campaign may be centred on finding Adie’s lost bones, but Fife officials also hope to use it to raise a broader awareness of the terrible injustices perpetrated against some 3,800 men and women who were accused of witchcraft in Scotland between 1563 and 1736, when the country’s Witchcraft Act was enforced. 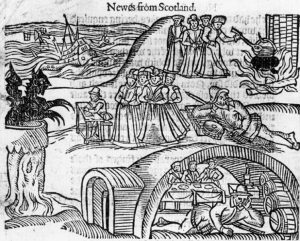 An illustration of Scotland’s North Berwick witches, which are shown meeting Satan in the local churchyard. Witchcraft paranoia led to thousands of executions across a 200-year period. From the contemporary pamphlet ‘Newes From Scotland.’ 1590.

Only one nation in the world can celebrate the New Year or Hogmanay with such revelry and passion – the Scots!

It is believed that many of the traditional Hogmanay celebrations were originally brought to Scotland by the invading Vikings in the early 8th and 9th centuries. These Norsemen, or men from an even more northerly latitude than Scotland, paid particular attention to the arrival of the Winter Solstice or the shortest day, and fully intended to celebrate its passing with some serious partying.

In Shetland, where the Viking influence remains strongest, New Year is still called Yules, deriving from the Scandinavian word for the midwinter festival of Yule.

It may surprise many people to note that Christmas was not celebrated as a festival and virtually banned in Scotland for around 400 years, from the end of the 17th century to the 1950s. The reason for this dates back to the years of Protestant Reformation, when the straight-laced Kirk proclaimed Christmas as a Popish or Catholic feast, and as such needed banning.

And so it was, right up until the 1950s that many Scots worked over Christmas and celebrated their winter solstice holiday at New Year when family and friends would gather for a party and to exchange presents which came to be known as hogmanays.

There are several traditions and superstitions that should be taken care of before midnight on the 31st December: these include cleaning the house and taking out the ashes from the fire, there is also the requirement to clear all your debts before “the bells” sound midnight, the underlying message being to clear out the remains of the old year, have a clean break and welcome in a young, New Year on a happy note.

Immediately after midnight it is traditional to sing Robert Burns “Auld Lang Syne”. Burns published his version of this popular little ditty in 1788, although the tune was in print over 80 years before this. 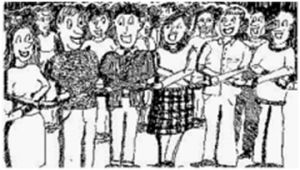 An integral part of the Hogmanay party, which is continued with equal enthusiasm today, is to welcome friends and strangers with warm hospitality and of course lots of enforced kissing for all. 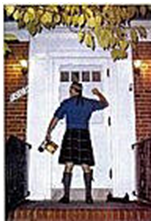 “First footing” (or the “first foot” in the house after midnight) is still common across Scotland. To ensure good luck for the house the first foot should be a dark-haired male, and he should bring with him symbolic pieces of coal, shortbread, salt, black bun and a wee dram of whisky. The dark-haired male bit is believed to be a throwback to the Viking days, when a big blonde stranger arriving on your door step with a big axe meant big trouble, and probably not a very happy New Year!

The firework displays and torchlight processions now enjoyed throughout many cities in Scotland are reminders of the ancient pagan parties from those Viking days of long ago.

The traditional New Year ceremony would involve people dressing up in the hides of cattle and running around the village whilst being hit by sticks. The festivities would also include the lighting of bonfires and tossing torches. Animal hide wrapped around sticks and ignited produced a smoke that was believed to be very effective in warding off evil spirits: this smoking stick was also known as a Hogmanay.

Many of these customs continue today, especially in the older communities of the Highlands and Islands of Scotland. On the Isle of Lewis, in the Outer Hebrides, the young men and boys form themselves into opposing bands; the leader of each wears a sheep skin, while another member carries a sack. The bands move through the village from house to house reciting a Gaelic rhyme. The boys are given bannocks (fruit buns) for their sack before moving on to the next house.

One of the most spectacular fire ceremonies takes place in Stonehaven, south of Aberdeen on the north east coast. Giant fireballs are swung around on long metal poles each requiring many men to carry them as they are paraded up and down the High Street. Again the origin is believed to be linked to the Winter Solstice with the swinging fireballs signifying the power of the sun, purifying the world by consuming evil spirits. 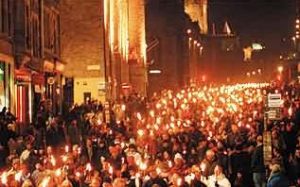 For visitors to Scotland it is worth remembering that January 2nd is also a national holiday in Scotland, this extra day being barely enough time to recover from a week of intense revelry and merry-making. All of which helps to form part of Scotland’s cultural legacy of ancient customs and traditions that surround the pagan festival of Hogmanay. 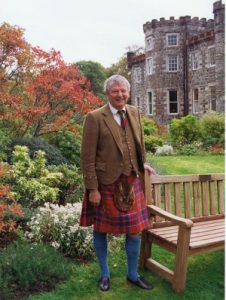 I would like to wish all clansfolk a very happy Christmas and I hope that 2020 brings you all health and happiness.

We, the family, are all well although, very sadly, my lovely sister Caroline passed away in October after a massive stroke which was heartbreaking as she was a shining beacon in all our lives.

On a brighter note, my youngest daughter Emily got married to a lovely man, Simon Williams, in September. They had a wonderful wedding in London which everyone much enjoyed.

We are in the middle of planning the clan gathering which will take place at the end of July next year and I hope very much that some of you will be able to attend as it should be an interesting and happy few days.

The Estate is, I think, in good shape with the hydro schemes enabling us to make plans for the future. We are involved in all sorts of activities such as forestry, tourism, holiday apartments, fish farming, stalking and quarrying.

Achnacarry is still being renovated and we hope to have it finished within the next three months. It is, I think, looking lovely.

I would like to take this opportunity to thank all those who help to keep the spirit of the clan alive and I realise that many of you spend a lot of time and trouble on matters relating to the clan for which I am very, very grateful.

With very best wishes to you all,